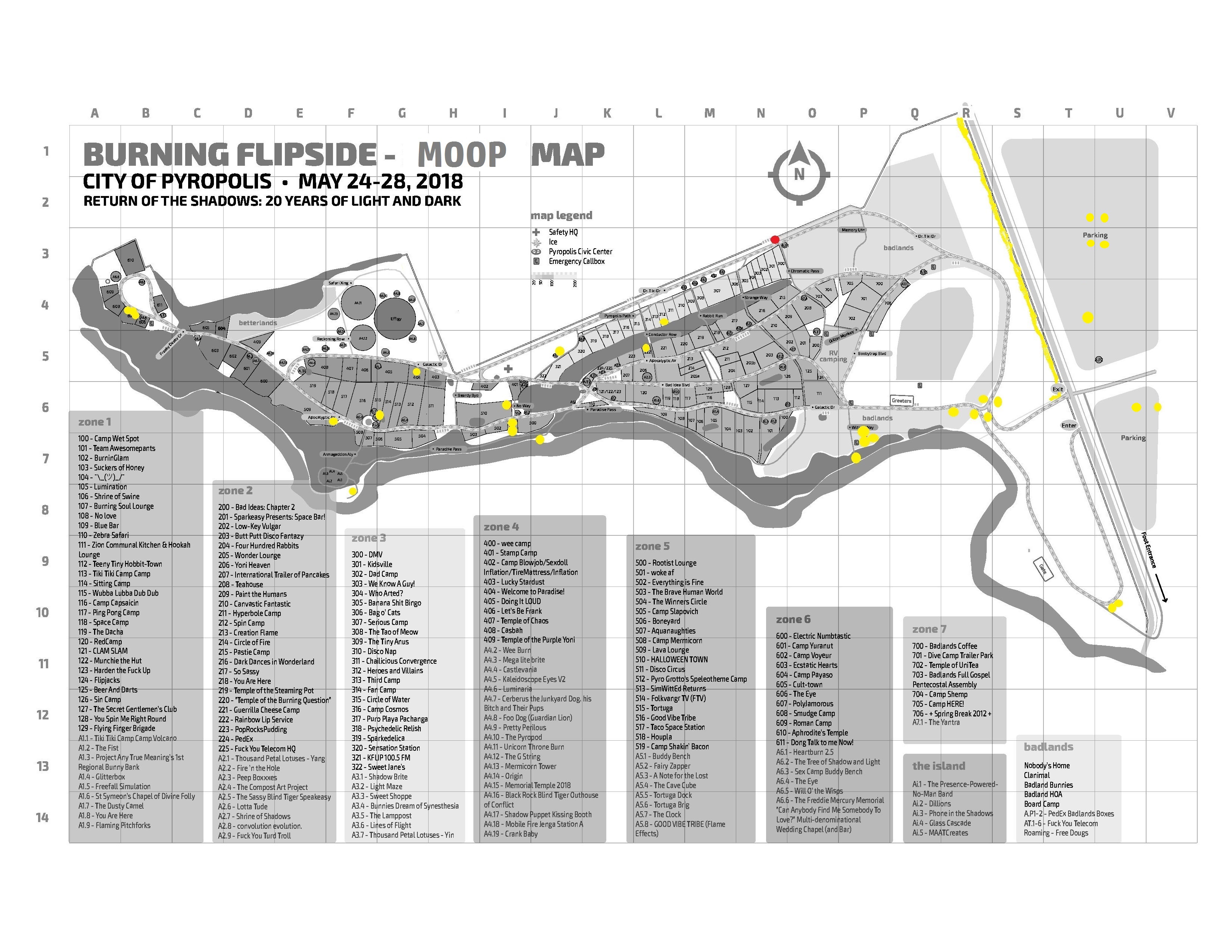 The 2018 MOOP Map shows that there was little MOOP found post-event. The low quantity of MOOP may be attributed to community awareness of LNT and a low number of volunteers for MOOP Sweeps and documentation.

The MOOP Map is a grey scale Safety Map which is annotated with yellow dots and red dots. Each yellow dot can be associated with an item of MOOP found. A cluster of yellow dots represents a MOOPy area. If the MOOPers feel that the MOOP item or action is atrocious, then the dot is changed to red.

Only 1 red dot was assigned to a MOOP item in 2018. It was a bag of bio-hazardous waste, which found either in or next to a portlet near camp 300. The stench was so horrible that most volunteers gagged and declined to move the bag. An anonymous Saint disposed bio-hazardous waste bag.

Overall, the vendors did a good job at LNT. However, the privacy fence along the county road did produce some MOOP.

If you see one or more yellow dots placed in your camp or near your camp, then please get involved. Ask questions of your camp mates and neighbors to raise awareness. Send email to cleanup18@burningflipside.com and ask for details on the MOOP findings. Visit the Cleanup and Site Sign Off booth at the next Townhall and volunteer for the next burn. We need you in 2019.

Disclaimer: Not on the 2018 MOOP Map were things picked up during the event, insignificant random findings or reported items post-event. There were some complaints about numerous cigarette butts on the ground during the event. However, most of the cigarette butts were picked up during the event by conscience burners. Being short on volunteers post-event, MOOPers spread wide and thin, walked fast, picked up that which stood out in the grass. MOOPers got a warm fuzzy feeling that things looked good, so a secondary sweep was not organized. However, MOOPers may have missed things with the spread between them, and the speed at which they moved. In some cases, MOOPers elected not to document small, random findings here and there, because of the documentation overhead and time.