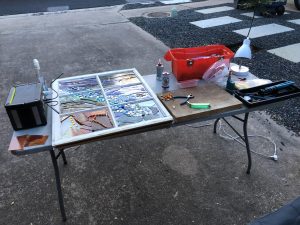 I have been doing mosaic stained glass art off and on for almost 15 years. I got into it in college when I moved into a house where the previous occupant left me a giant box of glass cuttings. I tried the Tiffany style copper foil method, but it involved way too much planning. I then started making tables and lamps that were built organically–often based on the shapes of the materials or patterns in the glass/stone. In the last few years, I’ve also gotten into programmable LEDs run on Arduino using the FastLED library. I’ve never combined the two hobbies before, and this seemed like a good time to try it out. I also have some sweet glow in the dark rock that I’ve been looking to use.

I hope they enjoy it at all different light levels. My hope is that it will have a wholly different feel during the daytime and at night. Who knows how it will ultimately turn out, but my plan is to use mostly opaque glass with lots of reflective nooks and crannies to have the max enjoyment during the day when it isn’t backlit. I’m then hoping to focus the led lights on creating movement in the ungrouted negative space between the tesserae (fancy word for the individual pieces that make up a mosaic).  Also, I have intentionally shown  next to nothing in the teaser. That little sun will be there though. For the rest of the image, there will be a waterfall/river cascading down on a left to right diagonal across the window. It will end in a pond of glow in the dark rocks. The top right third will have a mostly pink sunset with some wispy clouds. The bottom left third will be some sort of forest, most likely one that is on fire.

3.       Are there any stories/lessons learned that came out of the creation of this piece? (For example, I learned not to wear flipflops when using a wood router.)

It is incredibly hard to find time to do this stuff when you have small children. Especially when you don’t have an easy work area where it’s ok to have tiny shards of glass all over the place. I’ve still got a long way to go before finishing, but I think I will appreciate the limitations in scope I placed on this project. I’m not trying to get fancy, I’m just trying to get done.