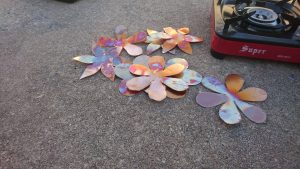 It all started by my strong desire to gift a village at Burning Man with something heartfelt, but also terribly dangerous for no good reason: a bunch of uncapped rebar (it was going to be labeled “Rebar Garden” and just appear overnight).  That didn’t happen because I over booked myself to my first big burn, so for year two I decided I should make it pretty, by attaching jagged edged cut metal flowers to the rebar.  And someone in that village wanted to create a safe space that was stupidly dangerous to get to, and so we worked together and it would have been great if we had our shit together, but we didn’t, so it was merely mildly amusing.
THEN, Misty said she wanted a Metal Garden, and I was all, I’ve got a dozen metal flowers on rebar that I would like to actually install somewhere, and where better than Flipside’s 20th year.  So, kismet.
What I most want people to get out of the art is not tetanus, not impalement on uncapped rebar, and not arterial spray from the sharp edges of the flowers.  A girl can dream.
During the nearly three year process of getting this art installed somewhere, I’ve learned the same lesson I always learn at burns, you can’t really schedule stuff at burns that involves someone else.  So if you want something to happen, bring everything you need to do your shit, even if they don’t show up.  Also, that copper is pretty flexible, but it’s not as flexible as paper, so making a copper whirly gig is virtually impossible without actual real instructions from somewhere, and maybe better tools than I have.
Loading Comments...