I have some info about Lumination’s Lightbox art piece for Flipside this year! This info was written by my camp mate Michael Daross. 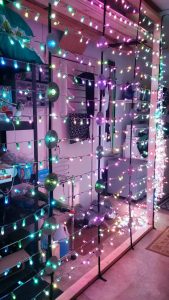 Is there anything you want the Flipside community to know or understand about your piece?
-The Lightbox is an 8 foot cube covered with string lights and various reflective materials (usually CDs) which participants can come inside of to dance, contemplate the universe, abuse their lungs, or just ogle the pretty shinies. It’s had a number of iterations, but has always been about entering a doorway and being transported to a place of beauty and tranquility. We usually have some refractive glasses or a Darth Vader mask lying around to enhance the effect, if your brain can handle it. This year, we’ve significantly upped the ante by replacing the white incandescent lights with 16 rows of programmable LEDs, controlled by Arduinos. There shall be rainbows. We’ve also added a floor so it’s not as muddy, and we usually have some downtempo music playing (unless we’re next to a sound camp).

-At my first or second Flipside, I saw some fire spinners with a wall of CDs behind them, and thought it looked really cool. And then I remembered that I had an entire crate of CDs taking up space in my garage (from a failed album release of mine, which we need not discuss). I thought, “What if you could be completely enclosed by lights and reflections?”  My campmate Maples and I were looking for an art project to contribute to camp, so we collaborated on the structure and design, making tweaks over the years, with help from Anthro, who is the electrical wiz, and other campmates. Our favorite part of the piece is just watching people enjoy it in various surprising ways; we’ve had a number of participants tell us that being in there saved them from being in a bad headspace.

Any funny stories or challenges in the creation?

-The main issue has been people not realizing there was a door and trying to drunkenly force their way through the walls to get inside. (We’re taking some steps to mitigate that this year.) And at least one group of people thought that the whole piece was some kind of guerrilla marketing campaign for the album, which would have been weird given that we basically destroyed the CDs in the process of making it.

Anything you want to say about yourself?

I am a marketing wizard, using my Flipside art to promote my musical failure by somehow getting people to pay for it even though it’s covered with adhesive tape.